You can't miss Madagascar on the box at the moment, and this is a good thing. The more attention the beautiful island gets hopefully the more likely people are going to be to travel there to wonder at the wildlife, have a holiday or get involved in NGO activities like Azafady etc. All of this has the potential to increase tourism, get money into one of the poorest countries in the world as well as highlights the need to preserve and research to precious natural landscape, flora and fauna.

As well as David Attenborough's stunning three-part BBC series Madagascar (some of which is on YouTube here, but which you can download on iTunes at https://itunes.apple.com/gb/tv-season/madagascar-series-1/id417947513)... here's just a few of the recent sightings still available to watch on BBC iPlayer (for a short time at least) or on YouTube:

Wonders of Life: Endless Forms Most Beautiful
Professor Brian Cox asks how, from a lifeless cosmos ruled by the laws of physics and chemistry, it is possible that a planet can produce so much wonderful, varied biology. In the third episode of this mind-expanding new series he travels to Madagascar to show how evolution throws up such wonders as the Aye-Aye lemur and the Indri amongst other things.

Zoo Quest to Madagascar
Wonderful archive of episodes uncover a country brimming with character and life. First transmitted in 1961, a young David Attenborough searches for the strange creatures that inhabit Madagascar. BBC Natural World - Madagascar Lemurs and Spies
Fascinating BBC film about the silky sifaka lemurs who live in the remote rainforests. They are one of the rarest animals in the world. A passionate scientist joins forces with an undercover detective to investigate the link between these endangered lemurs and illegal logging.

Deadly Mission Madagascar
Eight children from the UK travel to Madagascar to learn how they can help the island's wildlife. The team joins a group of scientists tracking two of the world's rarest lemurs. They have a few adventures and experience life in a country very different to their own. Hopefully I'll be having a few such adventures myself.

Roads Less Travelled
This is a bit older, from 2009, but a good little film about Lonely Planet author John Vlahides plunging deep into the heart of Madagascar and exploring its taboos and traditions. 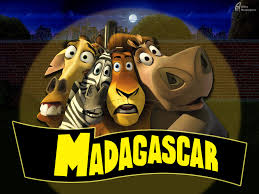